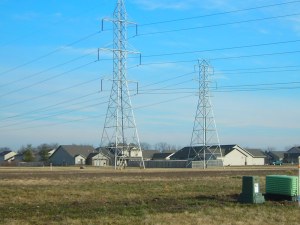 I left the house this morning to drive to my doctor’s appointment. In the cd player was Jim Kweskin & The Jug Band, and the first song was Blues In The Bottle. It’s an upbeat, smile inducing song. It was a good start to my day, after 4 cups of coffee and the morning political fix.

When I left the doctor’s office I noticed, pretty much for the first time, that there was building going on behind the office site. I drove back there and took a photo of the area. The houses in the distance are part of an addition that is being built, and the empty area to the forefront is being marked off for future expansion. It will be at least twenty years before the addition has any character whatsoever. As I took the photo I was reminded of a song that the Limeliters recorded in 1960 titled Charlie The Midnight Marauder. It concerned a man who came home late one night and entered the wrong house because they all looked the same. Other people might look at the housing tract and think of Malvina Reynolds’ Little Boxes.
Each weekday when I’m eating my lunch I put in a DVD and watch an episode of a TV series or mini-series. Today I watched The History of Rock ‘n’ Roll: Britain Invades, America Fights Back. Of course the first group they talked about was The Beatles. I was a junior in high school when they came to the states for their first Ed Sullivan appearance. I watched that show and was impressed. The next day in school I found that most of the other kids had either not watched the show, or didn’t like The Beatles. I only remember Christi Gumm being as enthused about them as I was. We discussed it in Spanish class, as best we could with the teaching that was going on. My guess is that most of my classmates will now remember watching the show and loving the group.
I have one final musical reference today. I drove down to Cindy’s office this afternoon. It felt so spring-like I lowered my window. The cd I played was The Tim Ware Group. Probably most people have never heard of them. They played New Acoustic Music, for lack of a better term. I must have bought my first album by them during the spring of 1980 or 81, because I always identify those songs with spring. If you want to check out the music, you can find it at http://www.modernmandolinmusic.com/contemporary-mandolin.html.
By the way, in case you’re wondering about the name of this blog. I came to it only after finding my first twenty-three choices were already being used. Well it does have a musical tie and is somewhat self-referential.
We are but a moment's sunlight fading in the grass. Chet Powers a.k.a. Dino Valenti